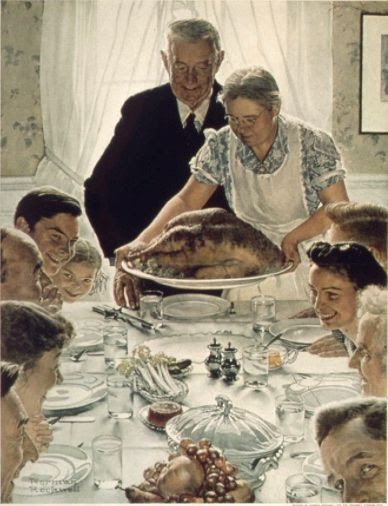 I was looking through a Bed, Bath and Beyond pamphlet I received in the mail. It contained lots of ways to make Thanksgiving happier and well planned out. I mentioned to Daniel that I wish our family was normal and we could have them all around a table laden with a huge turkey, dressing, mashed potatoes, etc. First off, you NEVER say “I wish our family was normal” to Daniel. That is tantamount to blasphemy in his book. But, then we looked at each other and said…at the same time…”Like a Norman Rockwell painting?” YES! Like THAT!

That probably didn’t really happen in many homes these days. No turkey…for the vegetarians, the vegans. No dressing for the gluten-free. No potatoes for the dieters. No pecan pie for the nut allergic. No pumpkin pudding for the dairy-free. And the list goes on.

Don’t you wish for Norman Rockwell kinda’ settings? Rockwell’s skilled hand captured the most heartwarming holiday moments as no one else could. You felt the joy of family gatherings, the reality of living a much simpler life talking over the back fence with neighbors, sharing an ice cream cone with a friend. The best of his holiday illustrations were often on the front cover of such publications as The Saturday Evening Post, TIME, and Newsweek…back when magazines were well-read and filled with great stories, recipes, and photojournalism.

Freedom from Want, also known as The Thanksgiving Picture or I’ll Be Home for Christmas, is the third of the Four Freedom Series of four oil paintings by American artist Norman Rockwell. The works were inspired by United State’s president, Franklin D. Roosevelt’s 1941 State of the Union Address known as Four Freedoms.  Freedom of speech, freedom of worship, freedom from want, and freedom from fear. (Perhaps our country needs to go back and reread that speech.)

Today, families are scattered all over the world. They rarely live down the street from one another, let alone in the same city or state. People…families… are divided on so many levels. Whether it’s their food preferences,  politics, religion, education, career, or gender choices, there is dissension in all the ranks. Not the Norman Rockwell kind of scenes we long for.

I’ve written much through the years about Creating a Haven of Peace in my home, my life, my community. I do believe it is possible to differ with others, sit at the same table and have a great meal together. In spite of all the dissension in the world today, holiday time does seem to bring people closer together.

I walked through a series of shops recently inside a vast warehouse, called The Venice Mercato.  Beautiful Christmas music was piped throughout, even segments of The Messiah. I didn’t want to leave. There is something about Christmas music that brings to mind Norman Rockwell settings. It makes you linger in stores, humming along and dreaming of family gatherings, snow on the treetops, warm cups of tea in front of the fireplace.

Our oldest son, Kevin, has always cherished the idea of Christmas all year round. Perhaps that is exactly what we need to heal the hurts, anger, and frustration in our country. Perhaps if we heard Joy to the World more often, watched It’s a Wonderful Life more frequently, and gazed at more Norman Rockwell paintings, we would feel more in harmony with our world and begin to bring back more peaceful days. And, maybe one day…things will get back to normal. A Norman Rockwell kind of normal!

The ’20s ended in an era of extravagance,
sort of like the one we’re in now.
There was a big crash, but then the country picked itself up again,
and we had some great years.
Those were the days when America believed in itself.
I was happy and proud to be painting it.
Norman Rockwell