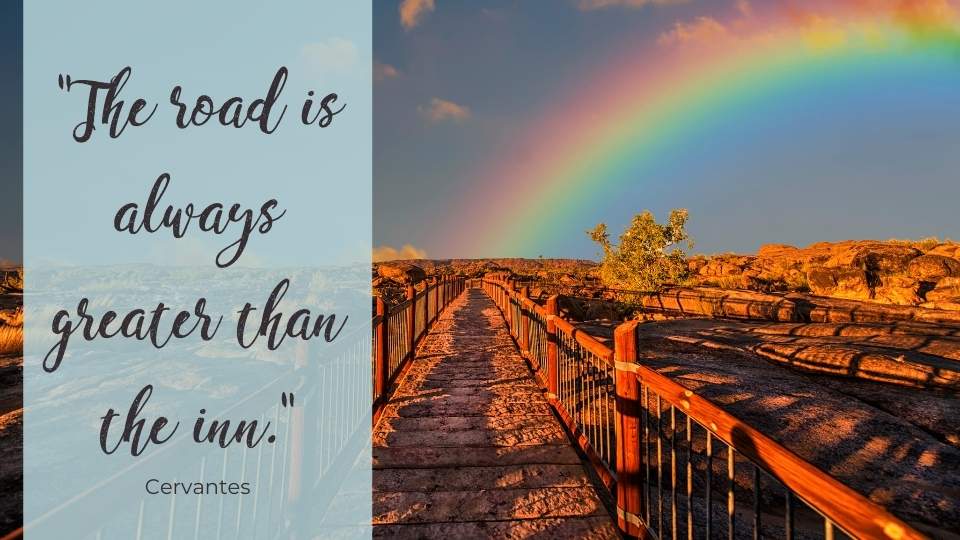 There’s a line from Don Quixote that we, as a family, long ago adopted as a life philosophy:

If you aren’t familiar with the story by Miguel de Cervantes, it was written in the early 1600s. The plot revolves around the adventures of a noble (hidalgo) from La Mancha named Alonso Quixano, who reads so many chivalric romances that he loses his mind and decides to become a knight-errant (caballero andante) to revive chivalry and serve his nation, under the name Don Quixote de la Mancha. He was kind of an earlier version of Robin Hood, only much less charming, cunning, and ruggedly handsome. Quixote rides his horse throughout Spain searching for glory and grand adventure. Cervantes wrote of Quixote’s traveling being far more fulfilling than the inn…or the end of his trip when he might search out a straw bed in someone’s shed to rest at night.

To relate this story to why our family uses this phrase, “the road is greater than the inn” I can give you many examples but suffice it to say, when we travel, we try to make the journey full of adventure and excitement. It isn’t just a process of getting from point A to point B, but, rather, how can we make the whole experience memorable along the way.

In art group, we all agreed that the goal of the class was to have fun. It has never been just reaching a goal to make, sell or promote our art. The goal is to enjoy the process along the way. There is so much more to creating art than finishing it. So much to be learned along the journey to completion.

Barbara Johnson sent this piece from author Kurt Vonnegut which I believe many of us can relate to. We all have many talents and gifts. Vonnegut’s perspective on how he looks at his gifts is something to ponder:

“When I was 15, I spent a month working on an archeological dig. I was talking to one of the archeologists one day during our lunch break and he asked those kinds of “getting to know you” questions you ask young people:

Do you play sports?
What’s your favorite subject?

And I told him, no I don’t play any sports. I do theater, I’m in choir, I play the violin and piano, I used to take art classes.

And he said something then that I will never forget and which absolutely blew my mind because no one had ever said anything like it to me before:  ‘I don’t think being good at things is the point of doing them. I think you’ve got all these wonderful experiences with different skills, and that all teach you things and make you an interesting person, no matter how well you do them.’”

And that honestly changed my life. Because I went from a failure, someone who hadn’t been talented enough at anything to excel, to someone who did things because I enjoyed them. I had been raised in such an achievement-oriented environment, so inundated with the myth of Talent, that I thought it was only worth doing things if you could ‘Win’ at them.”

Sometimes it is hard to begin a painting or a music score because we get so focused on the end result that we forget to enjoy the process along the way. When creating becomes “work” it often loses its allure. If we embrace the process, putting our heart and soul into a piece the outcome may be outstanding, but the enjoyment of the process can be life-altering. That’s why we have mental health professionals who provide art therapy. It’s a balm to the soul.

According to Goodtherapy.com, Art is healing because it forces you to forge a connection between your mind and your body. Unlike exercise, which works your body, or meditation, which clears your mind, art-making accesses both mind and body to promote healing.

So the next time you face a blank canvas, just start something. Enjoy the journey. In that enjoyment, you may find enlightenment that puts you into that zone of creativity you didn’t plan for. Enjoy that next adventure as Don Quixote did…