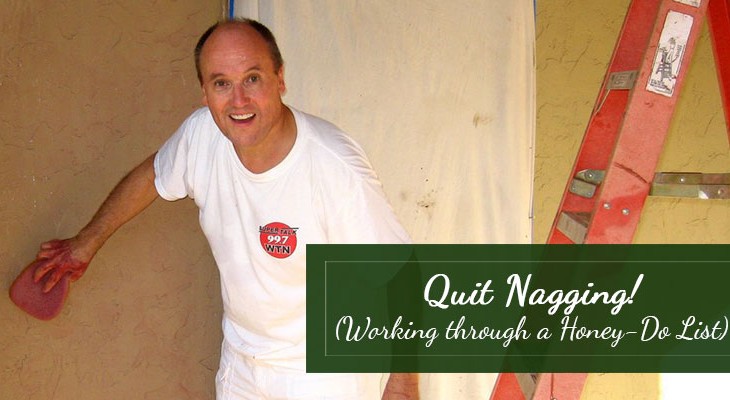 How often have you wished your spouse would quit nagging you to fix the rattle in the floor vent, the leaky faucet, the squeaky bathroom door or change the furnace filter?

Does your list get longer and longer and you never seem to remember or get the time to do all the chores?

An even more important question is WHY haven’t you fulfilled those requests?

This morning I mentioned a couple of things that I would like Dan to give attention to when he has time. Now Dan is a busy man. He has people pulling him in a zillion different directions all week long.

It seems reasonable that he should have his evenings and his weekends to sit back, turn on the tube, guzzle a brew and relax a bit.

But that isn’t the way it works in our home.

Aside from the fact that he watches very little TV and he doesn’t “guzzle a brew,” if there is something that needs to be done around the house that requires his attention, he does it without complaint and in quick order.

So today I mentioned the back storm door latch is loose and the door doesn’t shut properly, allowing all kinds of creepy crawlies into the house and one of the in-house vacuum system plug-in thingys isn’t working. It happens to be the one I would use most if the silly thing worked.

I went on to finish the laundry and in the time it took me to put one load into the washer and one into the dryer, he had repaired both annoyances.

I was thrilled. The central vac plug simply had a wire that had come unattached. I figured it was something I would have to call in a repairman….but fortunately I married my repairman.

Not everyone is a jack-of-all-trades. I am well aware that I know more about diagnosing a vehicle problem than most of the men I know. I learned about cars, engines, transmissions, etc. from Dan.

He once built a car from the ground up and I spent many hours at his side peering under car hoods to learn how they function and how I could help him.

I wanted to know what fascinated him. And I wanted not to be ignorant about the piece of machinery I depend on to get me from point A to point B.

I figure there are several reasons for a Honey-Do list to accumulate pages as long as War and Peace and never be tackled:

Dan was raised on a farm where he learned to do just about everything. I have rarely ever had to call in a professional repairman to take care of an issue in our house.

Not everyone is that fortunate and I am well aware that many guys don’t even own a tool box, much less a barn full of tools, machinery and gadgets.

But to allow a list of annoyances to build up over a long period of time is often the catalyst for a major explosion of anger, frustration and a feeling that one’s spouse simply doesn’t care.

I don’t see much excuse for a woman to have to nag her spouse to do some simple chores about the house. Nagging usually stems from having to be told over and over again and the chore is still neglected.

No TV program or snooze in the recliner is more important than peace in the home and this is one potential problem area that should be very easy to avoid.

If Dan wasn’t so adept at repairing the broken, leaking, or otherwise non-functioning annoyances in our home, and if we couldn’t afford a repairman, there is no limit to the “How To” videos on-line these days.

Procrastinating simply causes a buildup of anger and hurt that eventually erupts into Mt Vesuvius.

Most little household repairs don’t take a lot of time.

Sometimes it is mere seconds to go to the toolbox and grab a screwdriver to repair a loose screw or rummage in a cabinet to get and replace a burned out lightbulb.

Which reminds me I forgot to tell Dan about the two bulbs out upstairs in the recessed lighting fixtures. I have no doubt they will be replaced in no time. Because he cares. Gotta love the guy!

Joanne Miller has been happily married for over four decades to career coach and author Dan Miller (48 Days To the Work You Love).

In her new book, Be Your Finest Art, you will find more ideas about how to be a better communicator and listener and how playing games creates great memories and family time. This book is full of color and art and is a beautiful and affordable gift.

She has also authored four children’s books, which my kids LOVE. She and Dan have three grown children and twelve grandchildren and lots of years living the entrepreneurial roller-coaster life of adventure!