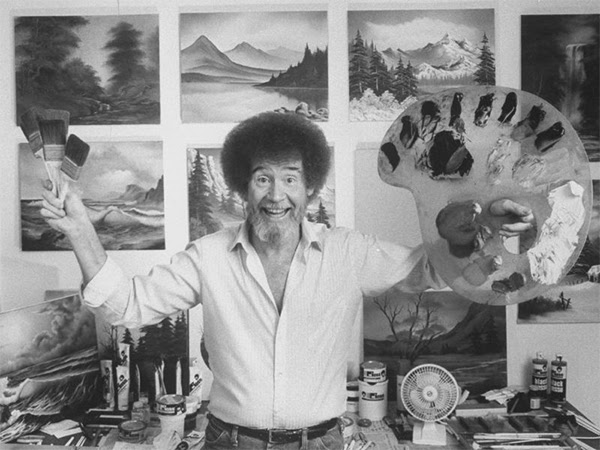 Now, here’s where things took a wild turn for Ross:One of his students, Annette Kowalski, was “mesmerized” by the jolly painter and encouraged him to strike out on his own.They pooled together their life savings, launched Bob Ross, Inc., and set out to make Ross into a TV star.A PBS executive gave them a shot.The show — The Joy of Painting, which aired between 1983 and 1994— was a huge hit and was broadcast on ~300 stations to 80m+ people every day.In each 27-minute episode, Ross would paint one landscape from start to finish, shepherding viewers through his process with a soothing disposition, entertaining commentary, and an occasional guest appearance by his pet squirrel, Peapod.Ross didn’t get paid for his shows. But Bob Ross, Inc. — which he partially owned — used the platform to sell paints, art supplies, workshops, instructional videos, and merchandise. By 1991, it was a $15m/year ($29m today) enterprise.The actual paintings, though, were largely an afterthought.Over the course of his career, Ross filmed 381 episodes of The Joy of Painting. For each episode, he painted 3 versions of the same artwork — one before, one during, and one after taping.But his TV career only scratched the surface of his total output.Pre-fame, in Alaska, he sold thousands of paintings. And even while famous, he painted nearly every day at seminars, events, and charity auctions in between tapings.All told, Bob Ross churned out ~30k paintings in his lifetime — nearly 3x the output of Picasso, a prolific painter in his own right.
BOB ROSS, INCORPORATED
As a part of Ross’s agreement with Bob Ross, Inc., the paintings he created for TV were work for hire, meaning the company maintained ownership of his work.When Ross died in 1995, Bob Ross, Inc. (and thus, the paintings) became the sole property of Annette Kowalski and her husband, Walt.Today, 1,165 Bob Ross originals — a trove worth millions of dollars — sit in cardboard boxes inside the company’s nondescript office building in Herndon, Virginia.Joan Kowalski, Annette’s daughter, and the current president of Bob Ross, Inc., tells The Hustle that the company had never really given the paintings much thought.“The paintings have always just sort of been here,” she says, with a chuckle. “We were sort of behind the times… it never occurred to us that anyone would want them.”The company, which can be reached by dialing 1-800-BOB-ROSS, gets constant inquiries from folks about buying the paintings.But they’re not for sale.“Our only mission,” Kowalski says, “is to preserve the mythological wonderment that was Bob Ross.”

I think all of us have watched Bob Ross at some time in our lives, and most of us have bought his products. Hard to imagine painting that many paintings in a lifetime. A lifetime that was fairly short. Ross died at age 52 from complications of lymphoma. I found the information about his life fascinating. Hope you do too.